Extend and Stretch
Frere Jacques
Extend and stretch (sit in sukasana – easy seated pose, or crisscross applesauce- and do seated side bends)
Extend and stretch
Twist and turn (seated twists)
Twist and turn
This is yoga, (hands overhead on “this,” then bring to prayer position on “yoga”)
This is yoga
Om sweet om, (hands in prayer, bow forward)
Om sweet om
Source: I got this from Kids Yoga Guide teacher training, but here is another from Be Grace Yoga

Halloween sun salutations
Hello, bats. Flap, flap, flap
Hello, worms. Squirm, squirm, squirm.
Place your hands on the floor. 1,2
And step back. 3,4
Lower your belly to the leaves on the floor.
Aoooo. howl at the moon so pale
Lift up to shake your werewolf tail
Bend your knees. Jump your feet up please.
Take a deep breath in
And feel the magic deep within.
Source: KidPowerment Yoga

Open the Book
Arms, legs, both
Close the book. Open the book. Turn the page.
Start seated with arms stretched out in front of you, palms touching. To “open the book,” stretch the arms wide. To close it, bring them back together. To “turn the page,” open just the right arm and close it, then the left arm and close it. Repeat “turning pages” until the kids giggle. Repeat the whole sequence using legs instead of arms. Then try arms and legs together.

Candle Breath – Hold a finger out. Pretend this is your candle. Take a deep breath in, and let it out slowly. Try not to blow your candle out. Just let the breath out slowly enough that your pretend flame would flicker and dance. Repeat this until the room is calm.

Opening Rhyme
(to the tune of The Farmer in the Dell)
We’re all here today. We’re all here today.
Let’s clap our hands and sing together.
Hip, hip, hooray!
Source: (To be honest, my library was using this before I started so I’m not sure where the previous librarian found it, but it looks like a modified version of Jean Warren’s Preschool Express song here.)

Book – There are Cats in this Book by Vivienne Schwartz

A Kitten is Hiding
A kitten is hiding under a chair
(make fist, pet fist with other hand)
I looked and I looked for her everywhere
(put hand over eyes, look around)
Under the table, on top of the bed
I looked in the corner and when I said, (pretend to look under/over furniture)
“Come, kitty, come, kitty, here’s milk for you.”  (make bowl with hands)
Kitty came running and calling, “Mew, mew.”
Source: Surlalune

Book – Meeow and the Little Chairs by Sebastien Braun

Hey Diddle Diddle
Hey diddle diddle,
The cat and the fiddle
The cow jumped over the moon,
The little dog laughed to see such sport,
And the dish ran away with the spoon.
Source: Traditional

Early Literacy Tip: Read books about your favorite animals. Take a trip to the zoo or a nature center.

We began by talking about how some things seem scary but in the end, they’re not.

Read The Little Old Lady who Wasn’t Afraid of Anything  by Linda Williams. We read this book walking around the room when the little old lady walked. I also brought in props to hand to participants: 2 shoes, a pair of jeans, a flannel shirt, 2 gloves, a hat, and a light up pumpkin head. Although we had more kids than props, I learned a fun bit of info from a fabulously silly librarian (shout out to Cliff Davidson) at Denver Public Library: it’s ok to not have enough props for everyone. Kids love watching other kids participate. The kids had to shake their props and make noise whenever cued.

We then used this scarecrow printable and potato stamps to make our own scarecrows, like this post. 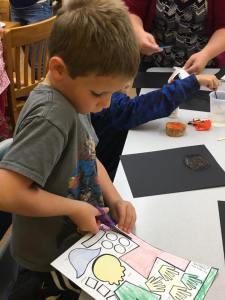 These guys decided to forgo the scarecrow and just got to stamping. That’s how learning and creativity happen, folks. 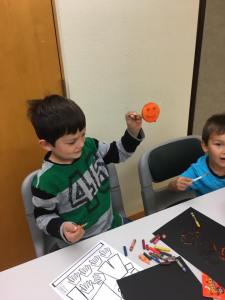 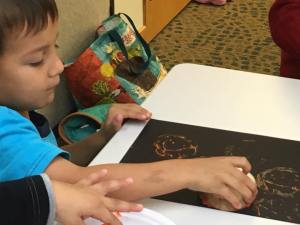 For our little ones event this month, we celebrated bodies and bones (sounds Halloween-ish enough to make me happy, while not frightening small children). We held this event in the library twice and once at an outreach event housed by Severance Town Hall.

I froze gloves full of water and drew germs on them, like this post from  How Wee Learn. The kids had to wash off the germs. Pro tip: Fill the gloves, and draw the germs on before you freeze them. Our younger kiddos really just liked the sensory aspect of this. 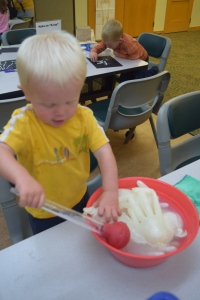 We used our five senses to figure out what was in the bag. Shake the bag. What does it sound like? Smell it. Can you smell anything? Open the bag and reach in, but don’t peek. What do you feel? Look inside. What do you see (Popcorn!) Taste the popcorn. 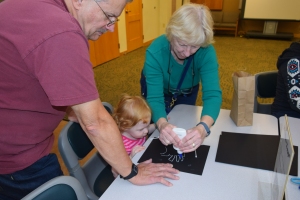 Our special friends from Toothzone helped us brush a dragon’s teeth and learn to floss with string, Playdoh, and Duplos.

Early literacy tip: Z is for zone of proximal development! In the educational field, the zone of proximal development is the distance in a child’s ability between the child can do by him/herself and what he/she can do with the support of a parent, caregiver, or knowledgeable adult. Families need to support their children as much as possible but also need to withdraw that support gradually as the child becomes more confident and capable to read and write on his/her own. 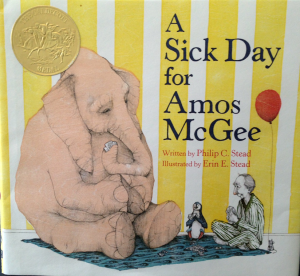 We began by talking about what happens when we get sick and what makes us feel better.

I set up a veterinary office with a doctor imaginary play kit the library had from a previous event. I had emailed the parents the day before to ask that their child bring in a stuffed animal. (I had a few extra on hand in case anyone forgot.) We first had to fill out their patient card, using this animal record sheet from Mother Natured. 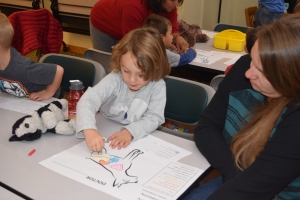 They then treated their animals at the veterinary office. 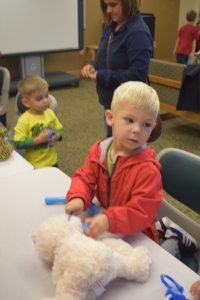 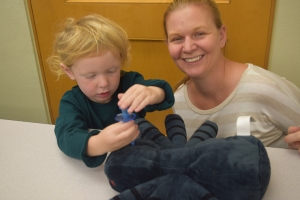 After the doctor’s office, they took their pets “home” for some oatmeal and tea (apple juice) like Amos McGee had when he wasn’t feeling well.